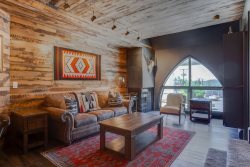 History of the Blue Church Lodge

The Blue Church Lodge was the first Mormon Church built in Park City, Utah. The great fire in 1898 spared little of Park City, the church was one of its victims. Rebuilt again in 1900 and served as a worship center until 1962.

The Church was vacant when a Virginia Developer purchased it and turned it into a nightly lodge.

The legacy of The Blue Church Lodge predates the great fire of 1896, when two-thirds of Park City's nearly 300 buildings went up in flames. Post fire reconstruction of the Gothic-style building, began in 1899 and completed in 1900.

The renovated church opened in 1976 with seven condominiums. It was a harmonious marriage of the old and the new! Ironically, on Jan. 9, 1982 a heather in the basement started a fire and it went up in flames once again, it burnt for 24 hours.

When it was over only a charred shell remained. It was questionable whether there was enough left of the old building to entitle it to keep its historical classification. The ruling is 75% of a building must still exist, several months later it was determined that 75.1% of the church was still standing. Every piece of burned wood had to be saved & fitted together. There was not enough of a margin to allow anything to be discarded.
In December 1983 the Church was once again opened for business. Like most church’s it has a large set of oak double doors, a bell tower and beautiful high arched cathedral windows with stained glass on a door and lobby area.

The Blue Church Lodge and Townhouse's are an eleven suite property, nestled between the Wasatch Mountains and located just steps away from  Park City's Historic Main Street. Close to all award-winning restaurants, trendy shops, pubs, live theater and skiing. There is truly something for everyone.